Easter. It’s not about a dead guy. It is about a guy dying. Same guy. A guy died. He just didn’t stay dead. 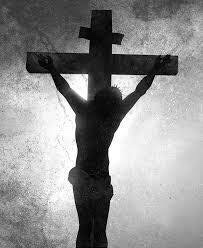 This how my childhood went, “What’s that? The church doors are open? Well then, we must attend. “ My mom.

Tradition tells me, We will be late. When we do arrive, We will smell of French fries, coffee and cigarette smoke. It was the perfume of the cafe my parents owned and operated.

We attended a Lutheran Church so the services were predictable; 3 hymns a 20 minute message and liturgy.

Sometimes there was a bonus.

Sometimes there was food in the fellowship hall in the basement.

Good Friday service In 1978 was just such a night. The service was somber but then there was food and noisy fellowship afterwards. It was winding down and my family was getting ready to leave. I had left something in the pew above us so I clambered up the stairs to grab it. The lights in the sanctuary were off, just the back lights by the alter and the cross on the wall. This year someone had added a rough wooden cross and it was standing on the platform between the pulpit and the lectern. The ladies of the church, two of them were ceremoniously draping the cross with a black cloth.

It suddenly hit me. This guy Jesus? The one we talked about, the one that had performed miracles. He healed. He delivered. He set free. He forgave. He brought back to life. That guy. He seemed so friendly. But tonight, for me in my understanding, he was dead.

He was dead. Even though there had been almost 2000 years elapse since it happened, the weight of the news hit me as though it had just happened that afternoon. I was washed over with grief and sadness.

I don’t recall the rest of that years Easter holiday. If I’m remembering it right, Our Pastor, a fantastic old school bible preacher Joe McGaw didn’t use the term Easter, he called it resurrection day. If I had been listening, maybe the Good Friday service and the resurrection day service would’ve brought me into faith sooner. I had other things to preoccupy me though, I had guys to hang out with, a pretty girlfriend, a 57 Chevy truck that wasn’t going to restore itself. I was busy. Too busy to connect the two pieces.

A few years went by and it all started to make sense. Well, not in a worldly way of making sense. But i understood that i was a sinner. God hated sin but he loved me. He sent Jesus to die, and that death, Jesus sacrificially dying for me, brought God and I back together. All of my sin was washed away by the blood that Jesus spilled dying for me.

Then 3 days after he died, death could not keep him any longer and he rose. The tomb was emptied by him, walking out of it.

“For there is one God and one mediator between God and mankind, the man Christ Jesus,who gave himself as a ransom for all people. This has now been witnessed to at the proper time.”

Jesus died. I am so sorry and yet so grateful. Jesus died But he didn’t stay dead. He rose from the grave.

Easter Sunday is a few days away. Resurrection day. We celebrate this event and would love for you to join us. We attend Ephrata Foursquare Church. Our service is at 10am. Most Christian Churches will be celebrating this Sunday so if you can’t make it to our service, please just pick one and join us in the celebration.

Whether or not you come to church, I hope that you will come to understand and believe the truth about Jesus.

“Now, brothers and sisters, I want to remind you of the gospel I preached to you, which you received and on which you have taken your stand. By this gospel you are saved, if you hold firmly to the word I preached to you. Otherwise, you have believed in vain. For what I received I passed on to you as of first importance: that Christ died for our sins according to the Scriptures, that he was buried, that he was raised on the third day according to the Scriptures, and that he appeared to Cephas, and then to the Twelve. After that, he appeared to more than five hundred of the brothers and sisters at the same time, most of whom are still living, though some have fallen asleep. Then he appeared to James, then to all the apostles, and last of all he appeared to me also, as to one abnormally born.